Yerevan is the capital and the largest city of Armenia, situated on the left bank (the river Arax) of the Ararat Valley. The Yerevan foundation’s year is the year of foundation of Erebuni (State of Urartu) – 782 BC. The population of the city is more than 1 million. The area of Yerevan is 223 km ². The climate of the city is extreme continental with hot, dry summer and relatively cold winter.
Yerevan is political, economic, cultural and scientific center as well as the most important transportation hub of the country. Two airports, subway and train station are served the city.
There are industrial enterprises in the city, 98% of them were built after 1917 (including about half after 1950). Yerevan – powerful energy hub, which gives the most of the electricity generated in the country. There are Yerevan Central Heating and Power Plant (550 MW), Kanaker and Yerevan station of Sevan-Razdan cascade hydro-electric power station, Yerevan hydro-electric power station -2.
The leading industries are machinery and metal industry, chemical and petrochemical, food, light industry, building materials production.
Various companies are investing in the economy of Yerevan. On the investment market take place banks, insurance agencies and other organizations.
The municipality of Yerevan promotes cooperation with the private sector and develops ways of cooperation in this field. Especially active public-private partnership is carried out in the field of urban construction, landscaping, creating of the mini agricultural markets. Cooperation is aimed to solving the municipal problems and the development of new technologies.
Yerevan is the educational center of Republic of Armenia. At the present moment 71 institutes of higher education are functioning in Yerevan, 19 of them are state institutes. According to data released by National Statistical Service of Republic of Armenia there are more than 92 thousand students are studying in Yerevan. The teaching staff of Yerevan higher education institutes consists of more than 10 thousand members.
Yerevan – one of the oldest cities in the world. Here there are ancient historical-cultural values. The city has a lot of museums, monuments, churches which show the high spiritual, cultural and scientific status of the city.
Monuments and places of interest concentrate in the center of Yerevan - an area designed and built by architect A. Tamanyan in the first half of the XX century. Since then many buildings in the city have appeared and disappeared but designing and architectural look in general remain without changes. The most common building material is pink tuff. That’s why Yerevan was named «Pink City».
The most important monuments of architecture and history of Yerevan are:
– Matenadaran (Institute of Ancient Manuscripts) - research and scientific centre of the government of Republic of Armenia, one of the largest archives of manuscripts in the world;
– Fortress Erebuni - remains of the ancient city of Erebuni (State of Urartu founded in 782 BC), which gave the beginning to the modern Yerevan;
– Zvartnots Temple (Temple of Vigil Forces) - the creation of early medieval Armenian architecture, located near Yerevan. The temple which was built in the VII century was destroyed during the earthquake in the X century. In 2000 year the archeological ruins of the temple and the area around it were included in the UNESCO World Heritage List;
– National historical Museum of Armenia was founded in 1921 with the National Gallery of Armenia. They both divide the general building of the museum complex. National historical Museum has rich archeological and ethnographic collections;
– National Art Gallery is one of the largest museums of art on the territory of the CIS and the largest in the world for the collection of Armenian art;
– Armenian Academic Opera and Ballet Theatre of A. Spendiarov.
Residents of Yerevan are very sensitive to their cultural heritage. They observe customs of their ancestors and believe in omens like many centuries ago. Conservation of national traditions is one of the most important aspects of every citizen’s life. Respect for elders, strong and warm relationship between relatives and neighbors, responsibility for family, kindness and hospitality are only some distinctive features of the character of local citizens.
Yerevan as stable and secure city for business, investment and attractive for tourism, suggests a wide range of high quality tourism products and services in an international tourism market. In Yerevan a lot of tourist facilities were built, many interesting tourist routes were created, local travel companies and global giants of the industry were involved.

The municipality of Erevan cooperates with more than 50 foreign cities and 8 international organizations and works with foreign diplomatic missions accredited in the Republic of Armenia. Cooperation is developed in the following areas: trade and economic, scientific and technical, and humanitarian affairs. Special attention is paid to the exchange of experience, implementation of joint social, cultural and sports programs and events, as well as attracting foreign investment.

Additional information about Yerevan you can find on the website: https://www.yerevan.am/ru 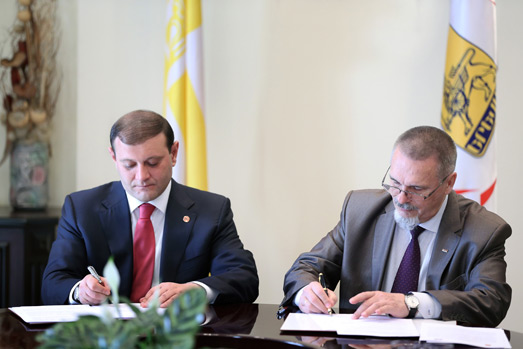 The Agreement on the establishment of sister city relations between the municipal unit Stavropol City (Stavropol Territory, Russian Federation) and the City Government of Yerevan (Republic of Armenia) was signed during the visit of Stavropol official delegation to Yerevan in 2013. The Agreement supports the exchange of experience in the field of local government, as well as cooperation in the sphere of education, culture, sports and tourism. In the framework of the Agreement exchanges by official delegations included representatives of local governments and the business community from Stavropol and Yerevan were carried out.

During the official delegations exchanges the prospects of business contacts development between the cities of Stavropol and Yerevan were discussed, exchange of experience on the formation and regulation of the consumer market, development and improvement of the trading network was held, visits to industrial enterprises and social institutions were organized.

Yerevan delegation took part in the official ceremony of inauguration of Governor of Stavropol Territory V. Vladimirov, solemn events dedicated to the 70 anniversary of the Victory in the Great Patriotic War of 1941–1945, the opening ceremony of Stavropol Friendship house.

Stavropol and Yerevan developed cooperation in the humanitarian and cultural sphere. Representatives of the art of the twin city have repeatedly performed creative programs at concert venues in Stavropol.

The head of the International and interregional relations department of the Stavropol city administration addressed the audience with a welcome speech. The participants of the meetings were informed about the socio-economic development, international cooperation and the most significant achievements of the cities of Stavropol and Yerevan. The experience of creating conditions for quality education, preparing students for state final examination and conducting tests was discussed. The program prepared by students of preschool and secondary educational institutions of Stavropol and Yerevan included poems, song performances, Russian and Armenian folk dances. The prospects for further multi-faceted interaction of general education and music schools in the cities were outlined.

In order to develop humanitarian and cultural relations between Stavropol and Yerevan, as well as the formation of patriotic self-awareness of students at secondary school No. 45 in Stavropol, a teleconference was held with students and teachers of school No. 35 in Yerevan, dedicated to the Victory in the Great Patriotic War of 1941-1945.

The event was attended by representatives of the International and interregional relations department of Stavropol city administration, Shengavit administrative district of Yerevan, management, teachers and students of educational institutions of the sister cities.

During the meeting, the participants told about the feat of their compatriots in the fight against the fascist invaders, the heroism of the residents of the sister cities during the Great Patriotic War. As part of the program, poems and songs of the war years were also performed, as well as national dances prepared by school students. As a result of the teleconference, they expressed interest in further cooperation in the field of education and the development of partnerships between educational institutions. The established links between students and the pedagogical community of the cities of Stavropol and Yerevan will further strengthen mutual understanding and develop a dialogue of cultures.

The reception of Yerevan (Republic of Armenia) official delegation included members of the Council of Elders of the sister city was organized in the city of Stavropol in accordance with the invitation of the head of Stavropol city in  September, 2019.